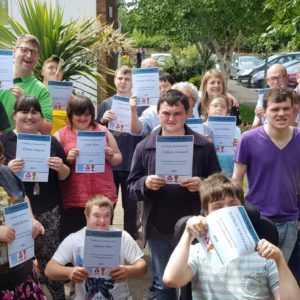 In 2018 Dosh Financial Advocacy received a grant from NatWest to deliver Money Awareness Training throughout the United Kingdom with a focus on the East of England.  The training was specifically for people with a learning disability aged between 18 and 30 and we also offered training to their main carers who could have separate training if they wanted or could attend the same training as the people they support. Thanks to the grant, we were able to offer this on a fee free basis throughout 2019.

The training was delivered by two trainers from Dosh to groups from one to 40 people, over 4 two-hour workshops and usually held somewhere familiar to the participants, such as their school or a local community centre.  The training aimed to build people’s independent living and finance skills and knowledge, as well as supporting people to become more confident around money. We wanted to make sure that there was a greater understanding of where money came from and how to keep it safe. 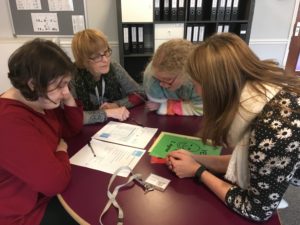 We used lots of different learning methods including lots of games with picture cards, creative activities, scenarios and sharing actual experiences, using questions, and giving key information in slides and learning booklets. We looked at generic bank statements to understand how to read them and then designed our own accessible ones! We also played games such as our Money Plan Game – this is a fantastic game with a really easy to read format which includes picture symbols (widgits) and it shows how to budget in an easy to understand way. This game is now available through our website at http://mymoneyplan.dosh.org/ and is free to use; it is a great way to learn budgeting.  We also have some free carers factsheets available which many of the carers found useful.

Many of the participants would 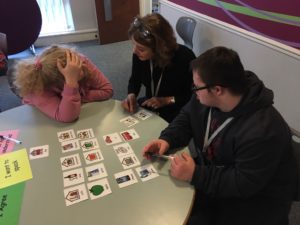 have been easily scammed or financially abused before the training as they had not been shown what kind of things were not ok, whether it was from someone they already knew or a stranger. I feel that the knowledge they gained in this area will help many of them in the future not be in that position.

There was a huge variation in how much understanding the participants already came with and so we tailored each workshop to the ability of the group to make sure that everyone had the best chance to finish with as much new knowledge possible. Although it was quite detailed in some parts, we received lots of praise on how much had been learned by everyone who attended and most people looked forward to their sessions. We were lucky to be joined by The Quality Company who conducted a peer evaluation of the workshops.

They found that 87% of people said the course had taught them more about money and 73% felt they could make better choices with their money.

On the final workshop we gave certificates out to those who had attended all of the sessions – I have to say this was, by far, my favourite bit. Calling out people’s names and watching them walk up to the front to collect their certificates hugely proud of themselves for attending and learning.

We even had some people looking and waving back to the others and plenty of smiles, claps and hollers followed all around.

All in all we delivered the training to over 200 participants and their main carers, it was very worthwhile and we look forward to delivering more workshops in the future. Dosh provides training workshops for colleges, self-advocacy groups, carers groups, support providers and Local Authorities, from one-hour of money games, to a full day’s session on how to support people well with money, all tailored to the group’s particular needs. If you would like to know more about our training, please have a read and get in touch with us to discuss what you’re looking for.

We would like to extend our thanks to NatWest’s Skills and Opportunities Fund for providing the funding to deliver this project and all the groups that supported and attended our workshop sessions.

This website uses cookies to improve your experience while you navigate through the website. Out of these, the cookies that are categorized as necessary are stored on your browser as they are essential for the working of basic functionalities of the website. We also use third-party cookies that help us analyze and understand how you use this website. These cookies will be stored in your browser only with your consent. You also have the option to opt-out of these cookies. But opting out of some of these cookies may affect your browsing experience.
Necessary Always Enabled
Necessary cookies are absolutely essential for the website to function properly. These cookies ensure basic functionalities and security features of the website, anonymously.
Functional
Functional cookies help to perform certain functionalities like sharing the content of the website on social media platforms, collect feedbacks, and other third-party features.
Performance
Performance cookies are used to understand and analyze the key performance indexes of the website which helps in delivering a better user experience for the visitors.
Analytics
Analytical cookies are used to understand how visitors interact with the website. These cookies help provide information on metrics the number of visitors, bounce rate, traffic source, etc.
Advertisement
Advertisement cookies are used to provide visitors with relevant ads and marketing campaigns. These cookies track visitors across websites and collect information to provide customized ads.
Others
Other uncategorized cookies are those that are being analyzed and have not been classified into a category as yet.
SAVE & ACCEPT
Powered by